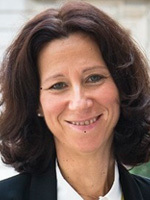 EFCATS proudly announces that the recipient of the 2021 EFCATS Award in Applied Catalysis is  Dr. Hélène OLIVIER-BOURBIGOU. The EFCATS award on Applied Catalysis is sponsored by BP. Dr. Hélène OLIVIER-BOURBIGOU, Head of the Fundamental Research Program at IFPEN, is awarded for her pioneering work on the use of ionic liquids in catalysis either as solvents for metal catalysts or as catalysts themselves, which led to industrial successful applications such as the DifasolTM process. In addition, she was involved in the discovery of new and improved catalysts based on Cr and Ni (Group IV) and related processes for olefins oligomerization, which were also commercialized by AXENS. She was named Scientific Woman of the Year, via the so-called Irène Joliot-Curie Prize, in 2014. The EFCATS award will be presented at the 15th European Congress on Catalysis, Europacat 2023  (Prague, August 27-September 2023), but already being formally given at an online EFCATS event on September 2 (2-5 pm).