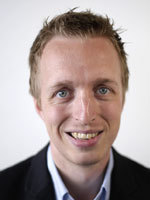 We are pleased to announce that Dr. Klaas Jan Schouten, who has graduated from Leiden University, The Netherlands, and was guided by Prof. Marc Koper is the recipient of the 2015 EFCATS Best PhD Award, administered by the European Federation of Catalysis Societies. The Award will be presented at Europacat XII (Kazan, Russia, August 2015).

This Award recognizes the best PhD Thesis in the field of catalysis with emphasis on theoretical or experimental discovery and understanding. Dr. Schouten is being specifically recognized for his work on the electrocatalytic CO2 reduction on Cu electrodes. Dr. Klaas Jan Schouten has suggested a new mechanism for this reaction, and has verified this mechanism through extensive measurements on single-crystal copper electrodes. This reaction was discovered by Hori in the 1980s and is currently under renewed scrutiny as a possible way to fix CO2 electrochemically. Schouten’s mechanism emphasizes the important role of the structure of the copper surface and the pH of the electrolyte, and in particular his work has shown that two different pathways exist for the formation of methane and ethylene, where the formation of ethylene takes place preferentially through the dimerization of carbon monoxide on the Cu(100) surface at high pH. In the meanwhile, this important but unusual reaction step has been confirmed by first-principles density functional theory calculations.  Schouten’s mechanism is the basis for further improvement of copper and derived catalysts for the electrochemical conversion of CO2. Dr. Klaas Jan Schouten currently works at Avantium Chemicals in Amsterdam, the Netherlands, as a junior researcher.