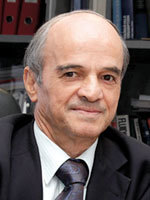 We are pleased to announce that the recipient of the 2015 EFCATS Applied Catalysis Award, sponsored by BP and administered by the European Federation of Catalysis Societies, is Iacovos Vasalos, Professor at the Chemical Engineering Department of the Aristotle University of Thessaloniki (1979-2005) and Emeritus Researcher at the Chemical Process and Energy Resources Institute, Centre for Research and Technology Hellas. The Award will be presented at Europacat XII  (Kazan, Russia, August 2015).

Professor Vasalos, whose leader- and mentorship were crucial for creating the Chemical Process and Energy Resources Institute (CPERI) and were setting the example for establishing several other research institutes, is being specifically recognized for his seminal contributions in the Chemical Engineering of Catalysis. This includes fluidized bed catalytic science and technology, with an emphasis on Fluid Catalytic Cracking (FCC), which were critical in developing and maintaining this industrial process as the primary technology for the production of motor gasoline. His team developed key technology for the evaluation of the activity and deactivation of FCC catalysts in pilot scale, a technology that is used today by over 35 refineries worldwide with significant cost savings. Together they also developed a widely applied technology to control sulfur oxide emissions from FCC regenerators through lifelong study based on a thorough understanding of the formation and control of sulfur and nitrogen emissions during FCC operations. Similarly impressive were recent contributions to the understanding and development of improved chemistry for producing chemical feedstocks from more sustainable bio-based feed sources, which he initiated at the Chemical Process and Energy Resources Institute (CPERI).